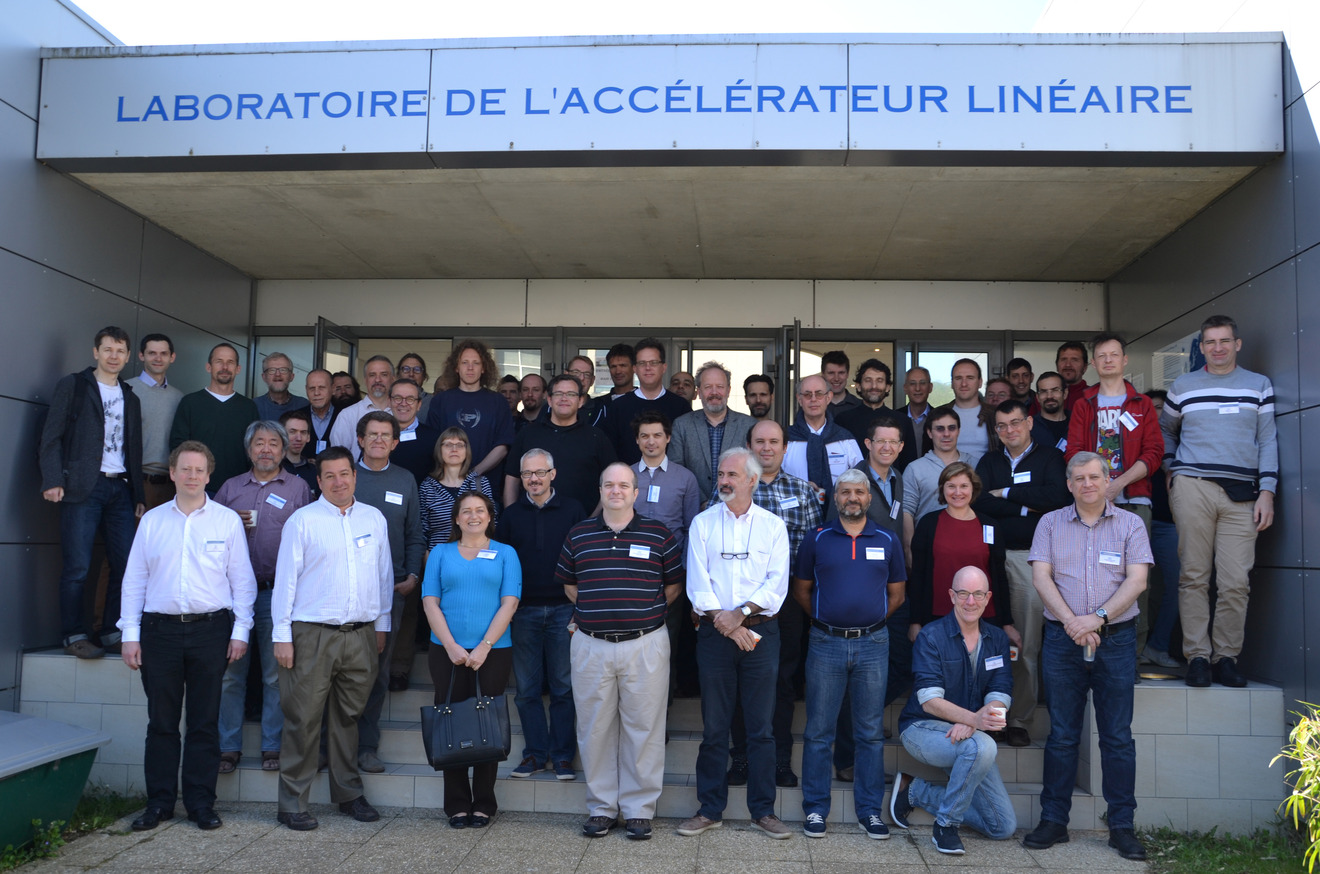 The HSF had its third workshop at LAL (Orsay, France) on May 2-4, 2016. It was well attended (70 people) representing many different laboratories, universities and institutions (~30) from both sides of the Atlantic, involved in different experiments (LHC, BELLE II, Intensity Frontier…). We were happy to see a lot of new faces! The Agenda was a mix of (lively!) general discussions and topical/hands-on sessions. Live notes of these discussions are available. This newsletter summarizes them.

One of the breaking news is that the HSF now has a logo! Thanks to J. Lingemann, the winner of the logo contest, and to all of you who took the time to submit a logo proposal.

Helping software projects is the main goal of the HSF. During the last year, the HSF has produced a Best Practices document (currently a Technical Note draft) and implemented it in a Project Starter Kit. This year, the HSF wants to continue its efforts on project support, focusing on helping projects get more visibility, and promoting the interoperability of software projects.

In addition, a new activity is starting: peer-reviews of software projects. The first review has been requested by GeantV, and will take place this October.

One of the topical sessions was about packaging. Software build tools and packaging are a key piece of software interoperability. As we cannot envision all of the projects adopting the same tools, the effort has concentrated on a review of the existing tools, and an attempt to identify a tool with the greatest potential as an integrating layer. One tool from the HPC world, Spack, generated a lot of interest. Some people tried to experiment with it in various contexts in the past few months. The workshop session facilitated an in-depth dicussion about Spack’s potential and it’s limits. We reached consensus about how to move forward. We will continue to collaborate with the Spack developer community. When the features identified by the working group and documented in our technical note are available we’ll start to recommend it to new projects and facilitate adoption by older projects.

See the Packaging WG section on the web site for more details.

We got three interesting presentations from non-HEP projects with goals similar to the HSF:

The second large topical session at the workshop, was divided into presentations about ML activities going on in the community, and a 3 hour RAMP (Rapid Analysis Machine Learning Prototype) session. Many topics were covered, including:

This activity is developing very quickly in the community, and a few months ago an Interexperiment Machine Learning (IML) forum was created. The IML forum intends to coordinate its activity with the HSF and will be the entry point to any ML activities in the HSF.

THe third topical session was devoted to sharing experience and questions about software performance, in particular the challenges of using efficiently the new hardware with their requirement of large-scale parallelization. There were reports from the LHC experiments, GeantV, ROOT, Art/LArSoft and astrophysics simulation. The discussion tackled several questions, in particular:

We are still far from definitive answers to these questions. There was an agreement that this topic is of primordial importance for the future, and should become more visible in the HSF. The new Software Technical Evolution forum (a follow-up for the Software Concurrency forum) will be in charge of convening this activity inside the HSF.

Initiatives for the Future

The HSF demonstrated some initial collaborative activities but to address the challenges ahead (e.g. HL-LHC) it needs more and dedicated resources. To convince funding agencies, and get a chance to obtain these resources, some US colleagues launched the idea of a Community White Paper that will contain a description of the challenges ahead of us, with a roadmap to address them. The idea is to build for computing something similar to the P5 process for HEP experiments in the US. In fact, the LHCC committee (that reviews the LHC experiments computing and WLCG infrastructure) recently asked the WLCG to prepare a HL-LHC computing TDR in a similar timeframe. Both processes could benefit from each other.

There was a consensus that this was a high priority activity for the coming year. The proposal is to hold a series of HSF-branded workshops and come up with a Community White Paper and roadmap by mid-2017. We are currently discussing the possibility of a kick-off meeting around CHEP (probably either colocated or end of October at CERN).

Some German colleagues, supported by Springer, proposed the idea of creating a journal dedicated to Data Intensive Science Software and Computing. Currently, there is no such journal, making it difficult to publish articles related to the computing aspect of our science (this is suitable neither for physics journals, nor for computer science journals). The goal is to have a refereed, abstracted and indexed journal that could acoomplish the following goals:

The plan is to have a continuous publishing, without any paper issue or volume.

There are still many “details” to sort out but the idea was well received, and the HSF is ready to help in moving forward with it.

The workshop demonstrated that the HSF is well alive with significant progress accomplished in the last year, yielding an increasing motivation. In addition to the initiatives already mentioned and the follow-up of existing activities, the main actions agreed for the coming year are:

We also discussed (again!) the possibility of a legal entity to support HSF. Despite not reaching a consensus yet, we agreed to further explore the possibility with funding agencies and lawyers. The general idea was that this entity, if created, should focus initially on IPR management, in a way similar to the Apache Software Foundation, to make possible IPR transfer.